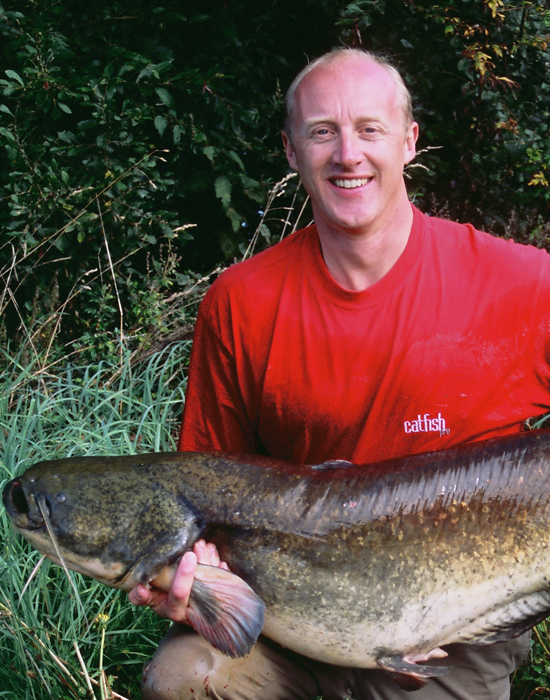 Catfish-Pro was set up by leading UK catfish expert Simon Clarke, to meet the growing demand for specific catfishing tackle, of which there was virtually nothing available. The range of products has grown with many innovations and new designs; (many of which have been subsequently copied but never bettered!).

We are totally focused on catfish specific tackle, as opposed the “make do” tackle and committed to developing new products where needed and developing existing products and accessories.

The Catfish-Pro team are also present at most of the major angling shows across the country and also at fishery roadshow days to provide “on the bank” advice.

We provide help via this site and social media but the best help is provided face to face when it is easiest to have a proper discussion and tactics and techniques. The Catfish-Pro team of consultants have over 200 years of catfishing experience between them and are available to help.

There are now over 500 lakes across the UK containing catfish – so they are probably closer than you may think!

Catfish in the UK

Catfish have been the UK since the 1880s, (at the same time as zander were introduced, both a folly of the aristocracy). Up until the 1960s there were just a handful of waters containing cats and that number grew slowly. In the mid to late 1980s there was a surge of interest, limited by the lack of supply of catfish. In response to this in the 1990s significant numbers of catfish were imported supplementing the limited UK supply. The number of waters has grown steadily since then and now amounts to over 500, spread over the UK with the majority in the Home Counties. Catfish remain classified as an alien species and subject to ILFA importation and stocking limits. More and more anglers now have access to catfish. The UK is about the northern geographical limit of Wels catfish and the growth rates are lower than in the southern European countries which have longer periods of warm water, significantly affecting feeding rates. Even saying that UK catfish are growing larger each year probably primarily due to the increase in volume of bait available (mainly carp baits) in the waters in which they reside. Catfish are predatory scavengers, and though they will take live fish, they will scavenge and eat the easiest available food sources, such as anglers bait.